In my clinical practice I treat someone with a cough every day, and in the winter, it might be 40% of the cases that come in. A sudden onset cough, once entrenched, can linger for weeks before resolving completely in the absence of good herbal treatment. Because TCM separates cough into various differentiations, it offers one of the best therapies, and because cough is such a frequent clinical presentation, it is important for practitioners to treat it correctly. Many TCM practitioners, however, mismanage the treatment of cough, giving the wrong medicine for the wrong stage, not employing herbs to fight the causative microbes, and not predicting the timing of how and when a cough will change, when it will need a new medicine.

To begin with, it is important to remember that all acute coughs are due to pathogenic microbes, with the lion’s share being virus. Only 5% of coughs are actually bacterial. [2] It is important for practitioners of TCM herbal medicine to evaluate whether viruses are playing an active enough part that anti-viral herbs need to be added to the therapy. This is most likely in the very first stages of a cough, especially when signs of a common cold precede the cough: runny or stuffy nose, achy muscles, headache, sore throat, or slight fever. At this point one should add, in addition to a formula for cough, herbs with strong anti-viral properties. This can easily be done by adding in products such as GZQ Formula (my herbal tincture), or the patent medicines Gan Mao Ling or Chuan Xin Lian.

As for the treatment of the cough itself, it is best to determine which stage the cough is presenting. I feel that coughs can be categorized into seven distinct stages, the first four of these qualifying as acute cough, and the last three stages as chronic cough, but which may have had its origins in an acute cough.

This stage may immediately follow early signs of a common cold (achy, stuffy, sore throat), or it may appear as the first stage. It is distinguished as having a slight dry cough without any phlegm. The cough is slight or weak, but not as weak as Stage 7, the yin deficiency cough. In any event, yin deficiency cough occurs after an illness, in contrast to wind-heat cough, which occurs following health, as an early stage of common cold.

This stage will last from one to 3 days before either resolving (and going away), or transforming into one of the other stages. The formula of choice is Sang Ju Yin, a formula developed by Wu Ju-Tang in 1798. (Wu is also the formulator of Yin Qiao San). The ingredients are sang ye (Folium Morus Alba), xing ren (Semen Prunus Armeniaca), jie geng (Radix Platycodon), lu gen (Rhizome Phragmites), lian qiao (Fructus Forsythia), ju hua (Flos Chrysanthemum), bo he (Herba Mentha), and gan cao (Radix Glycyrrhiza). Sang ye dispels wind heat from the lung, and it is reinforced by xing ren. Other heat clearing herbs include lu gen, ju hua, bo he and lian qiao. Lian qiao has the additional quality of being an effective herb against respiratory viruses. Jie Geng helps bring the formula to the lungs. 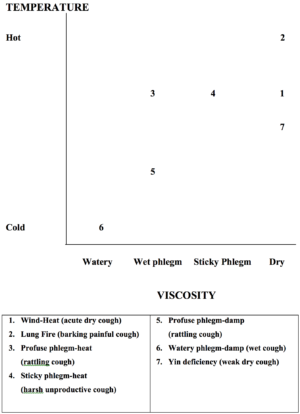 The next stage is that of Lung Fire. This is a particularly uncomfortable stage, manifested by a harsh barking cough. Here we have fire in the lung, which is to say extreme heat. It is always due to a pathogen, either viral or bacterial, and we see it commonly in children, including croup. This stage is quite short lived, because the fire quickly encourages the lung to react protectively with phlegm, and, untreated, this stage turns into phlegm-heat (stage 3).

Lung fire is actually an easy stage to treat because fire easily clears with cold herbs such as huang qin (Radix Scutellaria Baicalenses) or zhi zi (Fructus Gardenia). A good formula would ordinarily by the patent medicine Qing Fei Yi Huo Wan (formulator: Gong Tingxian, 1587) and available from both Tianjin Brand and Plum Flower, but unfortunately both these products have a level of da huang that is too high for most Americans. The Tianjin version puts da huang at 18%, which might cause the patient to experience abdominal cramping or loose stools. Of course, if you are making the formula yourself, just reduce the amount of da huang to 6% or lower.

This is quite a cold formula, cold enough to extinguish lung fire. Significantly, herbs such as zhi zi, lian qiao, xuan shen, huang qin, da huang and huang lian – accounting for 61.5% of the formula – all have antimicrobial properties.

Other products come to mind for the lung fire stage. Seven Forests’ Belamcanda 15 uses herbs such as she gan (Rhizome Belamcanda), yu xing cao (Herba Houttuynia), bai bu (Radix Stemona) and lu gen (Rhizome Phragmites) to clear harsh coughs due to heat. The classical formula yang yin qing fei tang is available as a syrup, and is a good adjunct, especially to relieve cough during the middle of the night.

The above formulas can clear lung fire cough quickly, within one to two days, but if the cough doesn’t go away, it will transform into Stage 3, Phlegm-Heat. Stage 3 always exhibits a rattle cough, which can expectorate relatively easily. The discharge is bright yellow (acute heat), brownish-yellow (a little later in the duration of the cough) or greenish-brown (after acute heat has left and is transforming to phlegm-damp.) [4] In children, who tend to swallow their phlegm, a confirmation can be made if yellow nasal discharge accompanies the cough.

This formula (and formulas like it) can be effective, but once phlegm settles in, it is difficult to remove. Untreated, this stage will last at least seven days, and sometimes up to 6 weeks. With herbal formulas, we expect gradual improvement over seven days, with lessening of frequency and severity of cough. The addition of the loquat-fritillaria syrups are somewhat helpful, but should never be relied on in isolation. I like to use the enzyme bromelain, 1 to 2 capsules without food, 2 x day, to help break up phlegm.

In both stage 2 (lung fire) and stage 3 (phlegm-heat), when there is a strong microbial component (which is to say harsh and stubborn), I use the syrup Hsiao Keh Chuan: Special Medicine for Bronchitis (Harbin), which contains the single herb man shan hong (Radix Rhododendron Dauricum). The taste is a little bitter, and use for longer then 3 days is considered slightly toxic. I have no reservations giving it to children, however, if we use it for 2 days or so.

This stage usually comes after a more wet stage, and manifests as a harsh cough with no expectoration. In the clinic, this is the most common presentation. By listening to the cough, or with a stethoscope, you can determine that the lungs still have phlegm: the cough has a rattly nature to it, and if there is expectoration, it is usually small tiny pieces. This stage can come before of after stage 3, phlegm-heat. It indicates heat with consumption of yin, and the therapeutic strategy is to clear heat, transform phlegm, and tonify lung yin. This last part is important. Usually if we tonify lung yin during phlegm, it will aggravate and build the phlegm. But in this stage, it is important to moisten the lungs slightly in order to allow the phlegm to release from the bronchioles. This can be accomplished with herbs like mai men dong (Tuber Ophiopogon), tian men dong (Tuber Asparagus), and so on. But it is still important to clear heat and transform phlegm. Formulas like Ning Sou Wan [6] or SVP Lung (from Tango) address this stage. [7]

This stage usually comes after phlegm-heat, and can settle in for a long period. Here, the phlegm is white or clear, and indicates that all heat pathogens are gone. There is usually a chronic rattly cough, with easy expectoration. The treatment strategy is to transform phlegm-damp, using formulas like Qi Guan Yan Wan. Because this stage (as well as the two stages described below) enters the realm of chronic, rather than acute, cough, I will not go into much detail.

This stage exhibits excessive water in the lung, and is often seen in emphysema in the elderly. Here, the mouth seems full of water, with the patient actually spitting out water. The synergistic use of herbs like lai fu zi (Semen Raphanus), bai jie zi (Semen Brassica), and su zi (Fructus Perilla), are used in prescription formulas such as San Zi Yang Qing Tang. This stage of cough is not particularly a sequelae of an acute stage, but can stand alone as a chronic condition.

Deficiency of lung yin may follow a long course of cough, and can also be seen in smokers and patients with AIDS or tuberculosis. It can stand alone as a progression of deficiency of kidney yin in older patients, or following chronic illness. Recovery is slow due to long-term deficiencies of qi which accompany deficiency of yin. It should not be confused with stage 1, early pathogenic wind-heat. Effective prescriptions include Bai He Gu Jin Tang, Mai Wei Di Huang Wan, and Sha Shen Mai Men Dong Tang.

In conclusion, please pay attention to the exact stage of a cough, demonstrated in my chart. With careful attention, and foresight that stages can and will transform, appropriate Chinese herbal interventions will prove successful.

JAKE PAUL FRATKIN, OMD is a Doctor of Oriental Medicine in practice since 1978. After seven years basic training in Japanese acupuncture and Chinese herbal medicine in this country, he went to Beijing for one year to do advanced hospital training in herbal internal medicine, pediatrics and medical qi gong. He is the author of ESSENTIAL CHINESE FORMULAS, (2014). In 1999 he received the national award, Acupuncturist of the Year, from the American Association of Oriental Medicine, and 2006 he received the award as Acupuncture Teacher of the Year. He is a recognized expert in the treatment of leaky gut syndrome, chronic respiratory and digestive disorders. Jake lives and practices in Boulder, Colorado

[1] I have previously addressed pertussis (whooping cough) in articles for Acupuncture Today, in July 2006 and September, 2006.

[2] “Most coughs in children are brought on by the viruses that cause colds and the flu. Rarely, pertussis (whooping cough) or pneumonia is the cause of a prolonged cough.”,  Department of Health, Oregon, http://www.patient.co.uk/showdoc/23069192/ Also, “Antibiotics don’t work for acute bronchitis. Now we have strong evidence saying that it shouldn’t be used for this purpose.” The Lancet May 11, 2002;359:1648-1654

[4] Rarely, the discharge will be a caseous brown, with the texture of a moldy yogurt. This is actually bacterial pus mixed with phlegm, and indicates serious bacterial pneumonia. In this case, the patient usually has high fever and is quite ill, and should be hospitalized with antibiotics.

[5] The term hua tan means to “transform phlegm”, rather than “expectorate phlegm”. It indicates the therapeutic strategy of liquifying phlegm so that it can be discharged through stool.

[6] Available in product form from Plum Flower as Quiet Cough.