In Part 1 of my discussion of the 3-Level Acupuncture Balance, we laid out the steps to perform diagnosis and implementation of the basic treatment using AcuGraph. To review, the 3-Level balance works on three acupuncture networks simultaneously: the Primary Channels, the Eight Extraordinary Channels, and the Divergent Channels. The Primary Channels distribute qi and blood, the Eight Extraordinary Channels regulate and adjust the musculoskeletal structure, and the Divergent Channels regulate and balance the internal zang-fu organs. In this and following blogs, I will talk about the history and origins of the 3-Level balance, which will deepen your understanding of this very profound approach to meridian balance.

The 3-Level Balance, as I present it, is most directly based on Miki Shima’s SAT protocol (Somato-Auricular Therapy). Dr. Shima’s point recommendations are included as a distinct treatment protocol in the AcuGraph menus. On the AcuGraph, this is called the Divergent Treatment, and can be seen in the following diagram. In the bottom left hand side, you can see the icon for the Divergent treatment, and on the right side, as “Treatment Plan”, you can see the recommended point combinations. We explain this in detail in our first blog, Part 1. 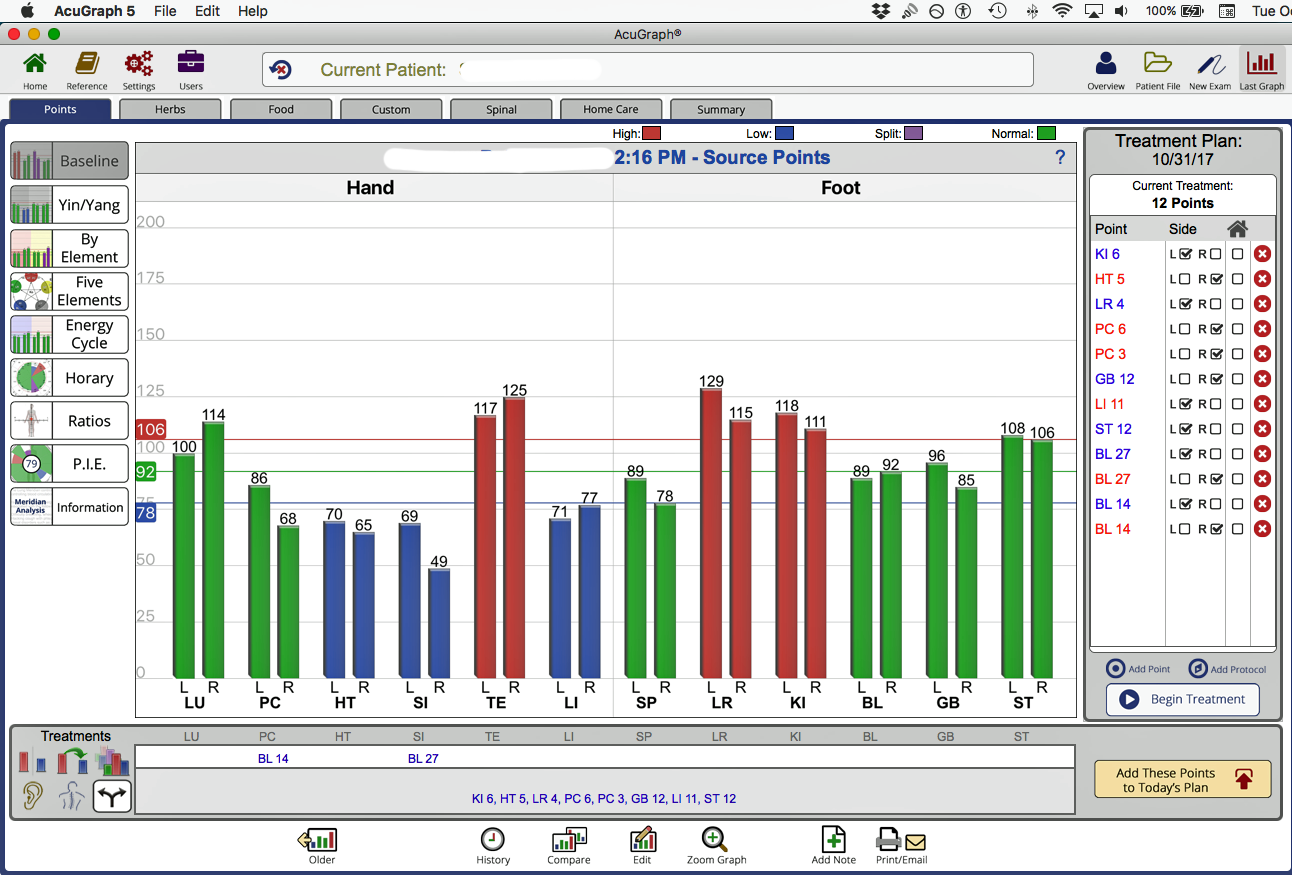 Let’s talk about the original SAT Therapy. From the late 1970s through the early 1990s, Dr. Shima studied the published work of Kobei Akabane and Yoshio Manaka, and their group of followers known as the Topological Society. Synthesizing and expanding on the original material, Dr. Shima called his approach SAT: Somato-Auricular Therapy. In this method, the “Somato” aspect combines Manaka’s Eight Extra Channel approach and the Topological Society’s Divergent Channel approach, which addresses root imbalances at a deep level. The “auricular” aspect addresses the branch complaints of the patient, and is based on the work of Paul Nogier and Terry Oleson.

Dr. Shima refined, developed and presented this material over a number of years, between 1989 and 1996, mostly in the United States, during which time I studied with him. For Dr. Shima, the “Somato” portion depended on Akabane’s jing-well point incense diagnosis. Unfortunately, this approach proved cumbersome and time-consuming for the practitioner, and painful for the patient, ultimately restricting any widespread application of this method. In the early 1990s, I had several conversations with Dr. Shima imagining a computerized approach to the SAT diagnosis, allowing it to become easier to apply. At that time, no practical program existed.

About 6 years ago, I was introduced to the AcuGraph, and buried in the menus, I discovered Dr. Shima’s SAT protocol, complete with recommended treatment! Now that we have an easy approach to SAT diagnosis, I was able to take the Akabane-Manaka-Shima lineage, and combine it with the other significant Japanese approach known as Keriaku Chiryo (Meridian Therapy). I am calling this combined approach the 3-Level Acupuncture Balance. It diagnoses and balances three distinct acupuncture networks: the Primary Channels, the Eight Extraordinary Channels, and the Divergent Channels.

ORIGINS OF THE 3-LEVEL ACUPUNCTURE BALANCE

Kobei Akabane, writing in the 1940s and 1950s, developed a diagnostic technique where he would lightly stroke the jing-well points with an incense stick, and count the number of strokes it took to achieve a hot response. He would then compare these numbers to determine which meridians showed excess (fewer strokes for heat response) and which meridians showed deficiency (more strokes for heat response). In addition to diagnosis, Akabane proposed many of the theories and therapeutics that developed later. He was really the pioneer of this whole lineage, influencing Yoshio Manaka and all of the members of the Topological society that followed.

Yoshio Nakatani, in the 1950s, discovered that acupuncture points had lowered electrical resistance when measured. He named these points Ryodoraku, meaning electro-conductive points. Looking for an alternative to Akabane’s incense diagnosis, Nakatani created Ryodoraku electro-meridian diagnosis in the 1950s. This became the predecessor of modern computerized meridian diagnosis, including the AcuGraph.

Dr. Yoshio Manaka (1911-1989) was an extraordinary innovator of acupuncture techniques and diagnostics. He confirmed many of the theories and ideas of classical acupuncture by observing palpatory responses on the torso, channels and points. He also famously invented ion-pumping cords, which can be used to direct excess to deficiency on any two points, on any paired meridians, or even points on the same channel.

One of his primary interests was the function of the Eight Extraordinary Channels. The Chinese classics look at these channels as a back-up reservoir for yuan-jing, important in development, growth and aging. Manaka saw them as a primary distribution pathway for qi and blood in the embryo, and then as the network that maintains the structural body throughout one’s life. He proposed an octahedral model that maintains body symmetry, seeing the eight Extraordinary Channels as “dividing lines capable of affecting structural changes as related to the octahedral topological model”. Relying on torso palpation for diagnosis, his Eight Extraordinary therapy balances the structure by using ion-pumping cords to move places of excess to places of deficiency.

Tadashi Irie (1927-2002), publishing in the 1970s and 1980s, developed Manaka’s use of magnets for diagnostics as well as therapy, and also promoted Yoshiaki Omura’s O-ring muscle testing. Most importantly, Irie studied the obscure, classical system of the Divergent Channels, and proposed a method to use them therapeutically. He utilized Akabane incense diagnosis on the jing-well points to make calculations prioritizing primary and secondary Divergent Channel pair imbalances. Irie recommended combining neck/head points with points on the extremities with ion-pumping cords in order to affect the balance of the divergent pairs (ST-SP, LI-LU, etc.). Balancing the Divergent Channels, in essence, balances and regulates the internal zang-fu organ pairs, and helps keep exogenous pathogens from reaching the organs.

Kodo Seki worked closely with Tadashi Irie to develop Divergent Channel therapy. He recommended yuan-source points as the extremity distal point reflecting his belief that yuan-jing played a role in Divergent Channel therapy. Seki advocated using either electro-stim or ion-pumping cords between master and coupled points. He prioritized yin channels that were deficient, and yang channels that were excess. He would also later propose running an ion-pumping cord from GV 20 to CV 22, the polarity to be determined by O-ring testing.

Kazuto Miyawaki continued the work on Divergent Channel and Eight Extraordinary Channel therapy. He proposed including new Eight Extra pairs so that all 12 channels could be part of the Eight Extra channel structural network.

Shigei Naomoto (d. 1987) was an engineer who built many of Manaka’s electrical acupuncture machines, and put much of Manaka’s thoughts and research into coherent articles. He utilized the Chinese clock in treatment choices, and proposed he-sea points on the knee and elbow as the distal points (replacing Seki’s yuan-source points); these would be combined with either Irie’s neck/head points, or with yuan-source points. He also proposed utilizing auricular points, which Miki Shima later adopted.

Dr. Miki Shima (1948-), residing in California, followed the published work of the Topological Society since 1978. He was most influenced by Irie, continuing Akabane diagnostic technique and therapeutics for the Eight Extraordinary and Divergent Channel therapy. He also promoted key discoveries of the Topological Society to American students, including O-ring testing, use of electro-stim, use of magnets for diagnosis and treatment, use of hinaishin and magrain pellets, use of ion-pumping cords, and use of gold and silver needles. He also promoted the auriculotherapy work of Dr. Terry Oelson and Dr. Paul Nogier.

Miki Shima integrated and developed the work of teachers before him. In terms of Eight Extraordinary Channel treatment, he took on Miyawaki’s suggestion of creating additional pairs, not only to include the four missing channels, but also to align Eight Extra with the classical Six Divisions. To do this, Miki proposed four additional pairings in the following organization. Note that four of the points are used twice, in two different pairings:

Choices of pairs to use would be prioritized based on the number of the incense stroke count. By prioritizing the two pairs most out of balance of the Eight Extraordinary pairs, and then balancing them unilaterally, this would adjust the tendino-fascial organization of the structure. It could also be used for recent or acute injury. The prioritization of the Divergent Channel pairs would also be based on the incense stroke count. It would be used for deeper and more chronic problems in the zang-fu pairs, including the internalization of toxins. Treatment would balance deficiency with excess by joining the paired channels at their head/neck point with a he-sea point on the elbow or knee.

Dr. Shima determined that it is best to balance the Eight Extraordinarys first, and the Divergents afterwards. This would prevent abrupt dumping of deeper toxins into the fascia.

Ironically, the California Acupuncture Board in the 1990s, run at the time by conservative and rigid TCM practitioners, refused to acknowledge the newer Japanese methods as “real acupuncture” and actually banned the use of ion-pumping cords and magnets. Miki transitioned to using gold and silver needles exclusively to effect movement from an excess channel to a deficient channel. But the Topological Society’s original intention was needle and ion-pumping cords, which I believe should be the preferred method, and of course today is widely permitted.

In the development of the Divergent Channel treatment, Dr. Shima settled on the following point recommendations for he-sea and head/neck points, with recommended ion-pumping cord polarity:

In my 3-Level Acupuncture Balance, we propose variations on these point choices, as well as integrate a Primary Channel protocol. All of which will be elucidated in a future blog!